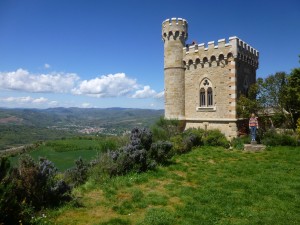 The Tour Magdala at Rennes-le-Château

Just 10km or a little under 20 minutes from here, perched on a hilltop near Couiza, is the village of Rennes-le-Chateau. This little village of less than a hundred people has become the centre of many conspiracy theories, speculation and fiction of the last century or so. Books include The Holy Blood and the Holy Grail (1982, following up on a couple of BBC documentaries) and more recently, the infamous Da Vinci Code.

Most of the speculation and conspiracy theories seem to centre on the fact that a  parish priest, Bérenger Saunière, appointed to the church in the town in the late 19th century inexplicably acquired enough money to renovate the church and presbytery, acquire land on which he built a villa and lay out formal gardens, and build the Gothic-Revival Tour Magdala (pictured above left) which he used as his library.

According to one story, he acquired his money by writing newspaper pieces for the American press alleging that the poor, faithful priest of Rennes-le-Château lived among heretics and served in a church that was falling into ruin. Another likely source of funds is indicated by the fact that an ecclesiastical court found him guilty of trafficking in masses and suspended him from serving as a priest — he had solicited and raised funds for thousands of masses more than he was able to perform. But there have been any number of rather more colourful explanations as to the source of his wealth, including:

Whatever the truth of the matter, the resulting notoriety has meant that this small French village saw up to 100,000 tourists a year during the height of the popularity of the Da Vinci Code and remains a popular tourist destination today.

Find out more on the official website of Rennes-le-Château: www.rennes-le-chateau.fr. 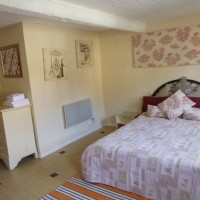